Consider this case, the CEO of a well-known consumer products company was delighted looking at its yearly sales numbers. The month-on-month progression showed an uptick and everyone anticipated better than average financial results. However, this happiness proved short lived. A periodic internal audit and physical verification ensued, which stated shortages in one of its key inventory items. On closer scrutiny, the internal team noted a similar difference between the received quantity and consumption records for the same material.
The revelation led to a myriad of questions – was this because of normal wastage in storage or was the material stolen from the warehouse? With all documents related to movement and consumption of goods seemingly in place, the management seemed stumped with the outcome. An in-depth investigation followed which exposed a startling fact – the material was never stolen because it never came inside the plant! The ‘fraud’ was done through tactical co-ordination and collusion between the supplier and the weigh bridge operator. The operator skilfully manipulated the weight of the supplier’s trucks to record the load invoiced, when he had actually not received it. The bounty for the short supply was shared amongst them. The act was done so cleverly that it remained undetected for over two years and cost the company close to INR 5 crores.

A weigh bridge is central to all manufacturing and processing companies that receive or dispatch goods. It is also a crucial part of it since anything that moves in or out of the manufacturing or processing unit, such as raw materials, packaging materials, finished products or even scrap, is measured by its weight. The peculiarities of these frauds make it difficult to detect and this could result in significant losses. One of the major reasons for this is that while processes have been upgraded through technology, the controls remained fairly traditional. Today, weigh bridge frauds are increasing by the day, costing companies millions through loss of inventory, production loss and even counterfeiting and grey market supplies.

Manipulation of the weigh bridge: Here, the fraud committed is a result of collusion between the operator and the transporter who siphon the goods without unloading the entire quantity. For example, the operator would instruct the driver to position the vehicle in such a manner that the weight captured in the system is lower than the actual weight. The excess amount is siphoned and sold in the market.
System manipulation: These frauds are executed in collusion between the operator, software developer, transporter and supplier. There may be cases where the developer has left a bug in the system, allowing the operator to manually override the bridge weight and alter it as required. This is usually led by the supplier who gets away with supplying quantity lesser than invoiced.
Manipulation by the operator: In this case, the operator captures the weight of an alternate vehicle instead of the vehicle with siphoned goods. For example, the operator records the weight of a genuine vehicle on two slips – one for the genuine vehicle and other for the one with siphoned goods. The actual weight of the fraudulent vehicle is never captured.
Manipulation of vehicle weight: This fraud is usually executed by the transporter or driver who siphons the goods in transit and replaces the weight in the form of removable equipment such as tire irons, chains, tool box, spare tire, water tank and tadpatri plastic. These remain unobserved when weighing the shipment. There may also be instances when even the supplier may manipulate the weight. For example, a coal supplier could pour water over the coal in the truck to increase the weight of the consignment by increasing the moisture content.
A key point to note is that the involvement of the operator is crucial for execution of scenarios related to weigh bridge fraud. Additionally, perpetrators tend to siphon goods that are valuable, sellable and which could be immediately consumed in the process. Let’s take the example of coal or cement or ore that may be siphoned. Besides these commodities, the packaging material could also be discreetly sold to counterfeiters and slow moving and expired stock could be diverted back to retail outlets. Commodities such as consumer products, coal, copper, cement, synthetic and natural fibres, wood pulp, acids, alcohol and spirits etc. face a high risk of weigh bridge frauds.

The need to take hands-on measures

Since these frauds pose a considerable risk to organizations, both monetary and reputational, it is necessary to address these issues and manage the integrity of the weigh bridge. To curb such instances and safeguard business, companies can deploy proactive measures to prevent misuse of the weigh bridge system. To start with, they should look to segregate the duties for the inward and outward movement of vehicles, weighment, unloading, quality checking and checks by the production department for inward movement of material. They should also conduct adequate and random rotation of shifts between the operators and make surprise visits to the weighment under observation.

Background checks are another critical aspect. Companies should undertake thorough due diligence of the operators to identify suspicious links with any transporters, suppliers, software developers as well as gauge the applicant’s reputation in the industry. The weigh bridge operations should be subjected to periodic internal audits and the software should be enabled with an audit trail to track all activities. Regular audits of the application codes and access logs should be done to look for any bugs or modifications.

Companies should also document the manual printing process of the weigh bridge slips when the application systems are down. They should also maintain proper records of all the manual slips issued during system downtime and these should be independently verified. CCTV cameras and security checks should be installed at the locations, with cameras linked with the weigh bridge application to capture a picture of the truck while printing the weigh bridge slip. Proper periodic maintenance of weigh bridge devices should be done including accurate calibration. Additionally, the production department should verify the ‘input to output’ ratio on a regular basis. It is important that the reasons for any significant change in the input-output ration should be analysed thoroughly.

To conclude, weigh bridge is a crucial element for any manufacturer but is ironically one of the most ignored aspects. Companies need to concentrate on these smaller aspects of its processes which can save millions. As they say, a stitch in time saves nine!

If you want instant information about how much material is crossing your weighbridge(s) sent directly to your smartphone or tablet, a new company called Rockaudit has the answer.

Set up by quarry operator Rod Taylor of Killala Rock in Ireland and computer expert Benni Borman, Rockaudit will sell you the hardware and rent you the software to keep control of what is going over your weighbridge(s).

The system is not designed to replace your existing weighbridge system but to supplement it to put management information at your fingertips. It can even continue running if there is a power cut because it can be powered by a 12V battery.

The company and its product is being introduced at Hillhead 2014, the quarry and mine exhibition on now (24-26 June) at Hillhead quarry in Derbyshire.

Benni (on the left) and Rod are pictured below either side of Rod’s wife, Sarah, on the company’s stand at Hillhead. 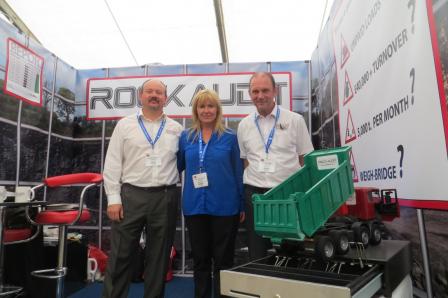